Last year, 75% of the trailers United Trailers manufactured were built with radial tires.  Radial tires are widely considered superior to bias ply tires.  Beginning in April 2015, all trailers we manufacture (with the exception of the XLE 4×6) will come standard with Radial Tires.

The Benefits of Radial Tires include:

Beginning in February 2015, all trailers manufactured by United Trailers will come standard with exterior LED Lighting.  “LED lighting is growing in popularity because of safety issues” states company president Todd Bontrager.  Benefits of LED lighting on your United Trailers includes;

In January 2015, United Trailers proudly released a new website.  “In today’s economy, it is very important to have an accurate representation of your company and its’ product line easily accessible on the internet”, states United Trailers President Todd Bontrager.  “We feel we have accomplished this goal with a website that is very descriptive, shows the many features available on our trailers and capable of adjusting to future growth.”

We hope you find this website to be a useful resource in the purchasing of a new trailer.  Please do not hesitate to contact United Trailers should you have any questions.

Trailer Acquisition Corp., Inc.. is pleased to announce the purchase of certain assets of United Expressline, Inc. The new company was formed by the existing management team of United and is led by its’ president Todd Bontrager. The new company plans to change its name in the near future to United Trailers, Inc.
END_OF_DOCUMENT_TOKEN_TO_BE_REPLACED 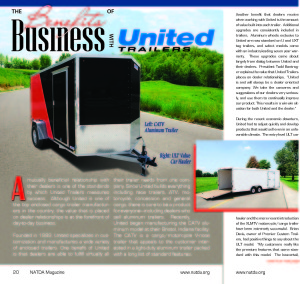 Benefits of Business with United

United Trailers remains a leader by providing clients with a diverse line of high-quality custom trailers.  By Kelly McCabe

The 2007 IHRA Top Fuel World Champion, Bruce Litton, is quite an intimidating presence when

behind the wheel of his 300+ mph dragster. But when the helmet comes off, it’s a different story. Bruce’s big heart shines through his welcoming smile to everyone he meets. Starting at the upcoming Spring Nationals in Rockingham, N.C. Bruce’s big heart will shine through his Lucas Oil dragster as well, as it displays a decal commemorating the life of a very special individual.Karsyn Bell only graced this earth for four years, but her impact was widely felt in her short time. The daughter of Brad and Anne Bell of Bristol, Ind., Karsyn was diagnosed with a rare brain tumor when she was only two and a half years old.She fearlessly fought a long battle and won many victories, but on January 23, 2009 she passed from this life, leaving behind a lasting legacy that lives on in the memories of all who knew her. END_OF_DOCUMENT_TOKEN_TO_BE_REPLACED

Bristol, IN — On April 17th, 1989, the first trailer came off the production line at United Trailers

(formerly marketed as United Expressline). Twenty years later, the company is one of the top steel-framed enclosed cargo and specialty trailer manufacturers in the U.S.When Warren Johnson founded United Trailers in 1989, his goal was to build a trailer that would stand out in the cargo trailer market. He believed a key to success was to listen to the customer and focus on custom manufacturing. END_OF_DOCUMENT_TOKEN_TO_BE_REPLACED

United Trailers are made in the U.S.A. and proudly sold by dealers throughout the U.S. and Canada.
Copyright © 2020 United Trailers. All rights reserved. Terms and Conditions